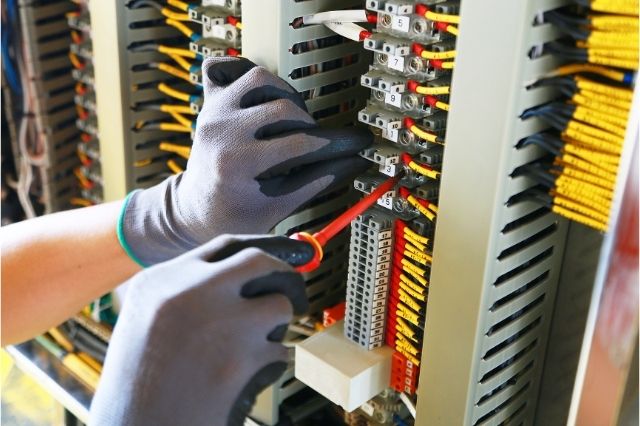 As discussed previously, IEEE 1584 is a critical part of the Arc Flash compliance story. IEEE 1584 is actually the “IEEE Guide for Performing Arc-Flash Hazard Calculations.” Originally created in 2002, prior to this, there was no detailed method to calculate arc-flash. Before this, Arc Flashes were a phenomenon that was realized to be a hazard a few decades prior, and there were some resources to determine arc-flash hazards (i.e., white papers) but were only applicable under a very finite number of conditions.

In the old days, it was largely agreed that shock provided most injuries, more traction for arc-flash awareness was gained starting in the ’60s and ramped up more in the ’80s and ’90s (the first NFPA 70E edition addressing arc-flash as a hazard was 1995). 1584 provided a means of calculating arc-flash incident energy over a wide range of conditions (voltage, fault current, arcing time, the gap between the conductors). These calculations use empirically derived models based on testing. The models provide equations and coefficients based on certain criteria and provide Arc-Flash Hazard (incident energy) level and approach boundaries based on data at each point in the electrical system.

About 300 tests were done for the first standard to develop the 2002 model, but shortly after release, many engineers believed that different test setups should be used to capture a wider variety of possibilities and that more testing should be done to refine the model – took 16 years to do! These ”tests” involved setting up calorimeters in front of metal cubicles at different distances and under different conditions and “generating” an arc-flash event (bridging conductors). Results were plotted, and equations were fit to the results to develop the calculation model. It is worth mentioning that the 1584 model applies only to AC systems; although there are methods to calculate DC arc-flash, they are not addressed specifically in IEEE 1584 (they are addressed in 70E and a few other IEEE published white papers).

There are some differences in calculations for medium and high voltage equipment that use different parameters, but we will discuss how the standard applies to a low voltage which is the most common voltage at most facilities.

The 2018 release brought with it 16 years’ worth of changes.

– Testing revealed that the exception that previously made it okay to exclude locations from the analysis was unfounded.

The enclosure size is how big the cubicle is that the arc-flash will originate from.

Cubicle enclosures that were used for testing are representative of a panelboard, switchboard, MCC bucket, etc.;

For low voltage systems (<600V), the calculation model applies to enclosures with heights and widths up to 20” (maxes out if taller/wider), and depths are considered either “shallow” (≤ 8”) or “standard.”

The reason tests were performed with varying enclosure sizes is that there was speculation that arc-flash occurring in smaller enclosure sizes would result in higher Arc-Flash levels; all else being equal, this was found to be true.

Bus size and orientation are an important part of arc flash calculation. The term “bus” generally refers to the exposed conductor/bussing at electrical equipment (panel, etc.). Bus orientation looks at where the arc would originate from in case of an arc-flash event.

VCB (top): If the “bus” is vertical and the conductor is not terminated into a barrier, the plasma from an arc-flash will expel downward and hit the bottom of the enclosure before dispersing out towards the worker.

VCBB (middle): If the “bus” is vertical and terminates into an insulator (i.e., into a breaker or a solid insulating barrier), the plasma is expelled downwards and then immediately outwards at the barrier. This configuration generally results in higher incident energy and is typically the most common configuration.

HCB (bottom): If the “bus” is horizontal (i.e., outward-facing), the plasma from the arc-flash is expelled immediately outward. This is typically the least common bus configuration and is often found at switchgear cubicles. This is also typically the configuration that results in the highest incident energy levels.

There are a few other bus orientations referenced in the standard that are typical for medium and high voltage electrical equipment that is not discussed here (IE VOA, HOA).

The 125kVA exception in 1584-2002 stated that electrical equipment fed from transformers <125kVA at <240V did not pose any significant arc-flash hazard. More testing revealed that this is not the case. Because of this, more equipment must be included in the analysis one-line model in order for a label to be generated. Previously, labels with a value of ”<1.2cal/cm2” could have been installed by inspection. This rule is no longer there; thus, more equipment must be included in the actual model. Depending on the facility, this can be upwards of 50% or higher.

MISCONCEPTION: In an arc-flash, equipment directly downstream of a transformer trips the protective device directly upstream of it (if coordinated properly, maintained, etc.). The transformer makes current pass more slowly, and thus the clearing time is longer and results in HIGHER incident energy on the secondary. Often people think that working at 208V does not pose as great of a risk for arc-flash, but often times this is quite the contrary.

Next month we will dive in deeper and show case studies the effects of the IEEE-1584-2018 has had on studies that have been updated since the change has come out.